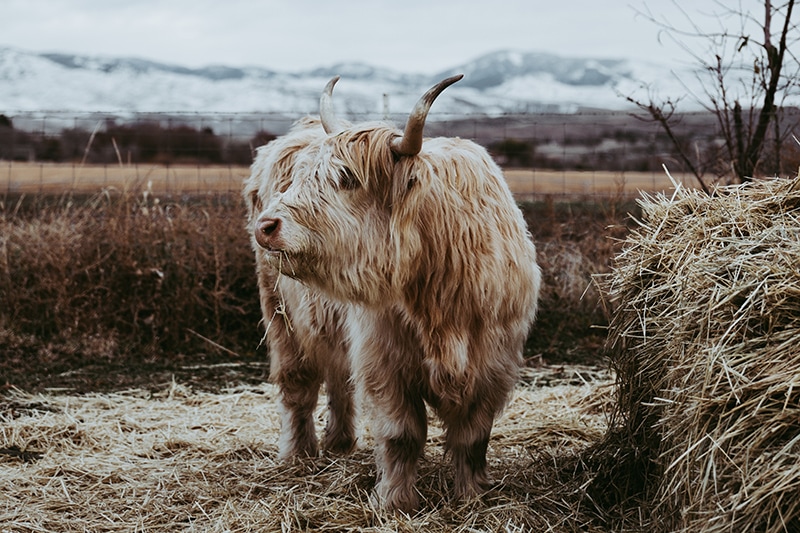 You’ve probably noticed that there is no shortage of cows in Idaho. Idaho just so happens to be the third-largest dairy producer in the nation! There are dairy cows (the spotted ones), meat cows (the black and brown ones), but have you ever noticed the fuzzy cows with the wooly coats, and large horns? Besides them being picture perfect, these cows are fascinating animals. Highland cows originate from Scotland in a mountainous, cold, harsh region called Highland, hence the name. They are actually the first registered breed of cattle in the world! These cows have adapted to the cold harsh winter weather, and not only are they able to survive in it, they actually thrive in it.

One of the first things you may notice on these cows is their furry, bed-head like coat. Highland cows have a double coat – a bottom layer that is softer and finer to keep them warm, and a topcoat that is longer and more coarse to keep off the snow and the rain. Basically, they have built-in snow jackets! But during the summer, they actually shed some of their coat, to survive the heat. Since they do have so much fur, they don’t rely on a high-fat content to keep them warm, as normal cattle do. Because of this they are a leaner cow with 40% less fat and cholesterol than normal cattle. Their meat is still well-marbled and tender, making them a high-quality beef. Typically, there are dairy cows and meat cows but another special quality of the Highland cow is that they can be both! They double as a dairy cow and their milk is typically rich with a high butterfat content. The Highland cattle that are most commonly seen throughout the Treasure Valley are rusty-ginger in color, but there are actually 7 other colors of Highlands including red, yellow, black, white, dun, silver, and brindle.

You can differentiate between the two sexes by their horns. Cows and bulls both have horns that can grow up to 3-4 feet! The cow’s horns point upward and are small and slender. Bulls have thicker, wider, shorter horns that curve forward with an upward rise toward the top. Don’t let their giant horns fool you, these creatures are just as friendly as they look. They use their horns to scrape off snow and find the grass underneath to graze. They aren’t just cute, but smart too. Often, Highland cows seek out attention from humans as they are very friendly and even-tempered. No moo-dy cows here! It is not advised to approach them if you have other animals with you or if they are with their calves;)

Next time you come across these friendly creatures throughout Idaho, you’ll have some fun facts to share as there’s so much more to them than meets the eye!